Euphemism leftism in the neoliberal era 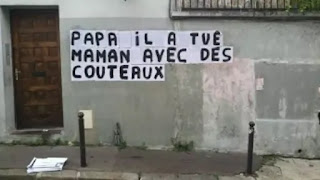 For some time, a group has been waging a graffiti campaign against femicide and other violence against women in France. I saw some graffitis in Montpellier this summer. I think, however, that the largest wing of the campaign is taking place in Paris. This morning, there was a slogan on our building: “I am not free until all women are free.” A supposed quote from a famous writer.

This bugged me. I’ve thought most of the grafittis were good – some of them were long narratives, some were stats, some were cries of rage. But this graffiti struck me as, forgive me, typical neoliberal leftism.

Let’s take it for a moment that the slogan is true. If so, one has to ask what “not being free” has actually meant to this famous writer. Is she in chains? Is she out of work? Is she beaten every night? Or does she appear at conferences? Are her words printed in mainstream journals and newspapers? Does she have an academic position, a good retirement lined up, and investments?

If the latter is the case – and I would bet it is – her state of “not-freedom” would be envied by most women in the world. All of which puts into question the valaue of "freedom" - what is it worth? What does it mean? To my ear, the slogan really devalues freedom, putting it in the category of inspirational, as opposed to existential, goods. .

But is the slogan false, then? I don’t think it is false, either. There is a sense in which freedom is systematic. There is a sense that the richest bastard in the world is actually morally and existentially injured by the misery of women who are beaten, raped and killed.

Instead, I would call this an exercise in false consciousness.

To get to this conclusion, let’s use substitution to measure the soundness of such slogans. What does it mean when I substitute, in a situation in which I am a woman who does not happen to have been beaten by a partner last night, or the night before, or maybe ever, the slogan. “I am beaten as long as women are beaten.” Or, even, if I, as a man, make that statement? What it does conjoin a truth– there are women who are beaten – with a lie (I am not being beaten, I do not have a domestic situation in which I am beaten, and all the beaten women of the world do no make me, X, beaten). Instead of showing solidarity, it falsifies solidarity. It leads to purely verbal action – a kind of euphemistic liberalism that substitutes, in the cruelest way, theatrical gesture for real social action.

One of the results of the vast breakup of organized labor as a force and a culture is that solidarity increasingly means: slogans and the maintenance of the order as it is, with platforms given to those who criticize it – even violently - without ever really doing anything to change it. To this extent, the criticism of cancel culture or “wokeness” has a point. Unfortunately, that criticism is not usually aimed at overturning the system either – it is rather sticking the tongue out at those who sense that the order is rotten and unjust. Social life is complex, and there is a struggle on the plane of history, of attitude, of what is said, all of which is imbricated in the social struggles of ordinary life – those struggles that would result in justice for beaten and murdered women, and structures that would make women safe – safe on the most primitive level.

I think, even, that there is a connection between the false bottom of the slogan and the con artistry of that Jewish woman from Kansas city, who claimed to be Afro-Rican.

What the anti-femicide group is doing is, I think, a nation-wide charivari. Eugen Weber has pointed out, in Peasants into Frenchmen, that the charivari, a ritualized riot, was a form of social control in peasant societies that controlled, to an extent, violence against women, in as much as it often targeted men who beat their wives. Of course, 19th century peasant societies were not exactly friendly to women, but social control was exerted at those whose violence went beyond the conditions that the village could tolerate. The anti-femicide charivari doesn’t need neoliberal inspirational slogans (although I understand well that inspirational slogans are part and parcel of what the people want. It is a dark, harsh world, and we want some light).