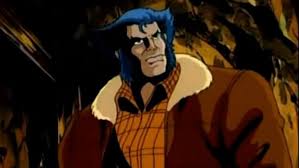 So I saw an X man movie with Adam. X men: the something something something. It is the one where some group finds a “cure” for the mutants. And Dr. Nematode (I know, not his real name. I joke!) leads a mutant revolt against these here States. Meanwhile, the core of the plot is classic: boy meets girl, boy falls in love with girl, boy kills girl for her own good. Myth, quoi! Wolverine falls for Rebecca, who conceals two souls within her breast, one of whom is some monster who not only wants to fuck – thus seducing Wolverine – but also doesn’t respect anything. For instance, she psychokinetically destroys a house that, from the look of it, would easily go for 2 million in the hot L.A. real estate market. And incidentally kills kindly Captain Picard, who in this movie is Doctor something or other, the Gandhi of the mutants. Then this Rebecca chick teams up with Captain Nematode and they attack Big Pharma island, costing beaucoup in FX, and then she gets mad, her monster is unleashed, she atomizes a whole army, and Wolverine has to use all his strength to approach her for one more kiss and then stabs her to death in the stomach. Happy ending!
Like most high concept (that is, brilliantly dumb) super hero flicks, the allegory of a “cure” for mutants is meant as clickbait for film critics, i.e. anyone with a Twitter account. Thus, instead of discussing bang bang, which, though fun to watch, is not the kind of thing that sustains controversy, one can discuss, say, the “cure” for same sex desire, or whatever. However, the allegory is pretty clumsy in this one. The premise is that mutants are civil beings, i.e. they have rights. But since the mutants kill each other and wreck property with abandon, and yet seem to face no handcuffs, lawyers, or trials, they are really being treated as political subjects and superheros. Of course, this in a way is more realistic to the way things are in the states, where the superhero class – the upper five percent – has to do something extremely nasty to even get to the arrest stage, and, like Jeffrey Epstein, are jailed, if at all, under remarkably mild conditions. Meanwhile, justice for the peon class in America goes like this: arrest, guilty plea, punishment. Something like 95 percent of the arrested don’t face any goddamn trial in the normal sense – that is, where there’s a fucking jury. That would completely overwhelm the system. In the land of the free, we’ve overcome this problem through the clever use of incentives: those who dare to ask for a trial will be found guilty anyway, but their sentence will punish them for having the audacity to ask for a trial. A perfect system! It gets rid of the whole “trial” ethos at one swoop, so we can jail our less successful contingent without spending an inordinate amount of time handwringing about it.
However, Hollywood and tv still love the trial, because the trial is drama. And so over the practical everyday authoritarianism of American life (worse, of course, on every level if you are an African-American) they have woven a pleasant picture of the law working like it did in the wet dream of the writers of the Constitution (giving a bit too much credit here to the writers of the Constitution, but work with me here).
Occasionally, reality gives fantasy a break and you have something like the Weinstein trial, where a 1 percenter, after a mere thirty year streak of rape, is actually sentenced to prison. Building on this thin wedge, I think the superhero paradigm should try out the trial. Wolverine, for instance – what if the cops actually took him in for murdering Rebecca (or whatever her name was). This would be an excellent high concept premise! You’d get two myths (the myth of justice in America and the classical myth that you gotta kill the chick you love if she’s such a slut that she fucks you) for the price of one.
Marvel universemakers, DC universemakers – try this out!
at May 15, 2020