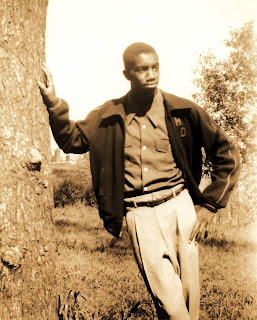 My mind is on Henry Dumas today. He was shot and killed in a Harlem subway station on May 23, 1968. At that point, he had written a number of short stories and poems, most of which came out after his death. As for that death, the police at the time said it was a case of "mistaken identity", and letting bygones be bygones, never investigated much less charged the white subway cop who killed him. This was followed by an oopsy moment in the 190s, when Dumas's biographer discovered the file on the case had been lost, due to a merger of departments or something. Dumas was 33. Here's an interview with the man who rescued his texts. https://www.nwaonline.com/…/professor-friend-keeps-alive-m…/
Dumas did all kinds of poems before he was mistaken identity murdered. He was young, it was the sixites, and he was the man to stick his fingers in every pie at that time. Some of his poems have that magic Blakean innocence:
My little boy
My little boy speaks
with an accent.
I must remember sometime
to lean my head down
and whisper in his ear
and ask him the name
of the country
he comes from.
I like his accent.
Here's a more famous poem:
Knees of a Natural Man
for Jay Wright
my ole man took me to the fulton fish market
we walk around in the guts and the scales
my ole man show me a dead fish, eyes like throat spit
he say “you hongry boy?” i say “naw, not yet”
my ole man show me how to pick the leavings
he say people throw away fish that not rotten
we scaling on our knees back uptown on lenox
sold five fish, keepin one for the pot
my ole man copped a bottle of wine
he say, “boy, build me a fire out in the lot”
backyard cat climbin up my leg for fish
i make a fire in the ash can
my ole man come when he smell fish
frank williams is with him, they got wine
my ole man say “the boy cotch the big one”
he tell big lie and slap me on the head
i give the guts to the cat and take me some wine
we walk around the sparks like we in hell
my ole man is laughin and coughin up wine
he say “you hongry boy” i say “naw, not yet”
next time i go to fulton fish market
first thing i do is take a long drink of wine
at May 29, 2020