the strike in France 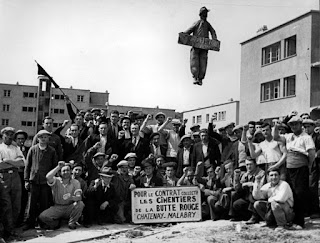 There is no more telling symbol of my lackadaisical – my bobo – leftism than the fact that as I write this, I am enjoying a manifestation in the little sidestreet near us in the Marais. Enjoying it, in fact, from our terrace. Adam, my boy, home from school because of the strike, and I have enjoyably stamped around the terrace swinging our arms and shouting Macron démission! I have a strong suspicion that the little group of militants, who are stopping the traffic on the Charlot, have slipped the cop net. Adam, who is convinced that all manifestation end in the throwing of lachromygene by the police, is expecting this denouement. Myself, I am not,  since driving a crowd up a narrow street is an invitation to disaster, but it is always possible, given the ultra-authoritarian tendencies of Macron’s horrible interior minister (the cop minister), Christophe Castaner, surely the worst cop minister since the dark days of the early seventies, when Raymond Marcellin declared war on the “ultra-left”. The Macronist theme of casseur, which, in my opinion, was a threat meant to bring out casseur and discredit the gilets jaunes, is waved around time and time again as Macron attacks social security in France, radically shifts the tax burden to the working class, and in general views himself as a Thatcherite modernizer.
Talk to any French conservative and they will tell you that France is a conservative country. This counters the image that dances in the heads of American lefties, dreaming of the Commune and such. But there is a great deal of truth in it, enough truth that it works against the liberal fantasies of the Thatcherite modernizer. The French like government subventions, they like vacations, they like social security, national healthcare, and free higher education not because they are leftists, but because they are a national inheritance stemming not just from the Popular Front 30s, but from the dirigiste Gaulliste 60s. Mitterand, that political chameleon, sealed the deal. True, the 35 hour work week is dead – but it was never very alive even after it became law. That desire to “keep your stuff” is working against Macron, whose contempt for the attitude, even as his stuff is the typical Davos crowd stuff, keeps his approval rating pretty low. In fact, I would not at all be surprised if Le Pen gave him a much bigger run for his money in the next election. Le Pen has tapped into the conservatism of the French vis-à-vis the dirigiste state – and we now know that Macron wants a sort of Gaullist foreign policy and a Thatcherite domestic one, the first of which has an appeal or interest only to Le monde’s editorial functionaries, and the second of which is the sure road to unpopularity, already gone down by Juppé in the 90s.
As I am finishing this up, the militants are still chanting in the cold December street. So far, so good.
at December 05, 2019