where did capitalism come from? 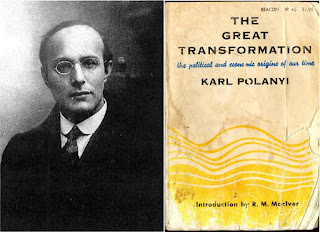 From our Willettsmag essay: where did capitalism come from? See the mag for the full essay.


Mainstream economics is proud of its methodological individualism, but it doesn’t believe it. The individual, as the economists understand, does not spontaneously produce his acts. The man in an office, or behind a plow, or behind a gun, did not find his places by inventing his scene. The idea that the individual invents society is, evidently, an act that has never attributed to any individual. So the mainstream economist has come up with a wonderful concept saver: the individual, in their terms, is essentially a chooser. Goethe’s Faust cried out that in the beginning was the act – but the economist’s homo economicus counters that in the beginning was the choice. The cosmology of the preference wraps the societal world in a mystery – for one never seems to come to acts, only to choices. Every blade of wheat, every board of wood, every drop of ink, is not what it seems to be, but is instead an agglomeration of atomic choices. By some inexplicable accident, these choices also seem to be matter, and have weight and chemistry. The only thing that isn’t chosen is choice itself.
This is a rich cosmology, but not necessarily a believable one. So it is reinforced by the time honored method of scolding. If we don’t hold to individualism, all responsibility is lost, and anarchy and concentration camps are loosed upon the world.
The origin of this cosmology is surely to be found in the period between around 1650 and 1789. And it did not arise among the peasant masses, yearning to profit maximize, but among a varied assortment of clerks and policymakers. Intellectuals in Edinburgh universities and ministers at Louis XVI’s court, as well as slave traders and sugar merchants were all starting to put it together.
By the late twentieth century, the capitalist operation had become so dominant – at least among intellectuals – that historians could not believe the cosmos had ever been different. Thus, in the spirit of conquest, the historians went back to pre-capitalist societies and attempted to rescue them for capitalism. Thus, theorems of market equilibrium, or of public choice, are imposed as the real language of rationality that the peasants were, as it were, articulating in mime.
My own sense is that the peasant economies were not irrational, nor are the rational capitalist economies non-peasant – the rational economic institutions are colonized by non-equilibrium, non-growth, non-maximizing kinds of behavior – or perhaps one should say that the latter kinds of behavior are colonized and exploited by extractive capitalism, suitably institutionalized –  and peasant economies surely involved calculations to some end, profit maximization and other capitalist traits. The question isn’t whether these traits existed, but how they became distributed and then became norms. When thinking through these grand categorical changes in the social economy, it is important to turn to contemporaries of the character shift and the vocabulary that it discovered and see how they interpreted what was going on.
at June 25, 2019