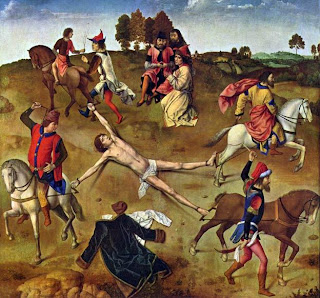 “But to imagine a plan for a republican constitution and to found a republic are two very different things. In a government where the public will, or the law, has not and ought not to have any other support, other guarantee, other ministry than the particular will, one cannot establish liberty but in making free men. Before elevating the edifice of liberty in Naples, there was in the ancient constitutions, in the customs, in the inveterate prejudices of the people, and in the interests of the moment, a thousand obstacles that it was urgent to know and indispensable to remove.”

Thus Cuoco, pointing to the republican dilemma when a foreign army, the French, took the city and most of the kingdom.

Four Corsicans are caught in Apulia when the French army took Naples. One is a former servant, Cesare, and one is a former artillery officer and deserter, Boccheciampe. Their other two companions are, by all accounts, unemployed vagabonds. According to Cuoco, the four were fleeing to Brindisi when the came to Monteasi, a small village, and took lodgings with an old woman, to whom they told the story that they were actually fleeing nobles – Boccheciampe was the brother of the king, and Cesare (this is not in the Cuoco account, but in Pietro Colleta’s History) for the duke of Saxony. Actually, the old woman was related to the royal intendant in the village, one Girunda. According to Colleta, Girunda was taken into the secret – according to Cuoco, Girunda went to the old woman’s house, knelt before Boccheciampe, and swore his allegiance. When the four got to Brindisi, they began to issue orders and raised an army of insurgents – Boccheciampe invested the province of Leuca, and Cesare marched on Barri. The men under their command, according to Cuoco, were ‘baron’s men’, criminals, and miscreants who had escaped from one prison or another. According to Colletta, the four Corsicans were soon busy firing and hiring magistrates and emptying the treasuries of various towns and villages, while imposing fines on the “rebels” to the King.

Not only did the people rejoice in this pillage of the “patriots” – they were encouraged by the clergy, who, knowing the men were imposters, nevertheless seized the chance to proclaim them legitimate in order to set going a countryside insurgency. Even the Bourbon nobility, well aware that the King’s brother was not a rude artilleryman with a Corse accent, played along with the imposters.

And so the revolt in the countryside begins not in support of the patriots who have overthrown the barbaric remnants of feudalism in Naples, when the Republic was proclaimed, but is conducted by the people for the feudal regime, under the banner of four imposters, against Republicanism, as it is understood, itself.

Since Naples was the home of Vico and Bruno, there is much here for the Gnostic historian, avid for intersignes, to contemplate, especially as the glosses are supplied by an intelligence like Cuoco’s, whose form of enlightenment materialism (for instance, he attributes the heterogeneity of customs and tempers in the Kingdom of Naples to the heterogeneity of the property arrangements instituted by feodalism: “… and the feudal system, which, in the centuries which followed barbarism and preceded civilization, always varied according to places and circumstances, rendering property diverse throughout; and that diversity necessarily passed into the moeurs, which are always analogous to the nature of property and the means of subsistence”) is lit up, as well, by the darker torches held aloft by Machiavelli and Vico.

The problem of “removing” these impediments to create a new connection between the state and the people – that organic connection of happiness – seems, in the chaos of 1799, to have reached a moment of dream tension in which parts of the fabric of legitimacy – as if will later be called – peel off to reveal the form of the variable that takes the sovereign position. I want to intervene in this dream to recall a typology I explored years ago, at the beginning of the Human Limit project: that of the sage and the fool.

Oh that counter-enlightenment crewe! From Vico onward – and actually, from the witch onward, from the tales in the forest onward – there is a program, or at least a programmatic stance, even if there is no system, or even if the systems are crackpot, deviant, ad hoc – which consists in the rejection of the power of the will to truth. One finds (inevitably?) that the opposition between sage and philosopher that structures Francois Jullien’s argument in A Sage is Without Ideas eventually crystalizes about this matter, our matter, the will to truth. The sage, in Jullien’s account, does not develop a neurosis about the truth – and thus a whole intellectual culture slips the bonds and knots of a certain mastering cognitive passion, orienting itself instead with relation to the road, or way.

Jullien does not ask if the Dao is the path of pins or the path of needles – little red riding hood does not figure in his story. More curiously, neither does the fool. Unless – and here one feels Jullien’s grasp of the theme loosen a bit – that role is taken by the Daoist.

The question I am posing here is this: how does the sage-imposter differ from the fool-imposter?
at October 14, 2010