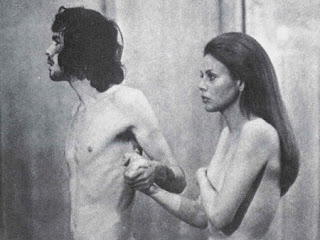 Levi Strauss’s introduction to Mauss’s collected works contained an important reflection on one of Mauss’s fundamental theoretical innovations: the notion of a “total social fact.” Since LI’s work in progress on happiness deals with one such ‘total social fact’, the emotional customs that are accepted in a given community or society; and since we have been thinking of how these customs have changed as the market-based industrial system became dominant in Western Europe and the U.S. over the 18th and 19th century, we thought a coupla posts on Levi Strauss and Mauss would not only rhyme, but be timely. Our duel with LCC turned us on to Derrida’s persistent attempt to interrogate the semantic force of the “material” in dialectical materialism – which frames his patient unwinding of Marx’s metaphoric of specters, spooks and spirits. It is here that two total social facts overlap: one is the capitalist rationality of constant movement – of commodities, populations, and technologies - governed by the overarching principle that all agents seek pleasure, and all pleasure is defined by an increase of goods; the other is an older social fact, in which reciprocities are not, in fact, governed by the pleasure principle, but by a construct founded on what an anthropologist have called the sacred, defined by the supposed connection between a worldly temporal power – the sovereign - and the cosmic principle(s) that makes for life. The latter, of course, became the hallmark of the savage in the 18th century, but that savagery was never exorcized by capitalist rationality, which instead chose to either ignore its continued existence within the social whole, under the pretense that it existed in the interstices, or to reduce it – demystify it – as, indeed, the Savage’s form of rational choice. Of course, the savage in this one sided dialogue has no voice in the matter – as Derrida shows, Marx and his opponents all agree on the project of doing away with superstition – and yet, if the savage did have a voice, he or she would recognize pleasure, or the utilitarian’s happiness, to be, indeed, the kind of spirit, or spectre, or mana, whose infinite permutations are embodied in the savage’s cosmology, with all the marks of such a character – the impossibility of anchoring it to one place in the system, the rituals of supplementation that endlessly attempt to make up for its failure, and the curiously rigid theology that has grown up around defining it to a hair’s breadth without ever really explaining it at all – it exists in that breathless space between the self-evident and the impossible. In Marx’s work, the polemical and political texts pull away from the economic work just at this point. To put it simply, the revolutionary moment, which is the moment at which the alienation produced in the capitalist system reaches a saturation point in which it bursts asunder all the social bonds, is impossible to reconcile with the totalizing system of ‘material interests’ that are outlined in the economic work. They work in two different frameworks.

Well, this is a thing to return to later. Now, here, out of the kindness of LI’s heart, is a translation of the key grafs in Levi Strauss’s description of the total social fact.

“One could even say that it [the notion of the total social fact] commands them [Mauss’s preoccupations] since, like them but in a more inclusive and systematic fashion, the notion proceeds with the same care to define social reality; but: to define the social as the reality. Now, the social is not real except in as much as it is integrated into a system, and here we find the first aspect of the notion of the total fact: “After having forcibly a little too much divided and abstracted the social, it is necessary for sociologists to attempt to recompose it in its entirety.” But the total fact does not succeed in being such by the simple reintegration of discontinuous aspects: familial, technical, economic, juridical, religious, under whichever one of which one could be tempted to apprehend it exclusively. It is necessary as well that it is incarnated in an individual experience, and this from two different points of view: firstly in a individual history that permits to ‘observe the conduct of total beings, and not divided into functions”[facultés]; next in what we would love to call (in rediscovering the archaic sense of a term whose application in the present case is evident) an anthropology, that is to say, a system of interpretation giving account simultaneously of what is physical, physiological, psychic and sociological about all the conduits [toutes les conduits] : “The study alone of this fragment of our life which is our life in society is not sufficient.”

The total social fact thus presents itself with a three dimensional character: it must make coincide the literal sociological dimension with its multiple synchronic aspects; the historical dimension, or the diachronic; and at last the physio-psychological dimension. Thus, it is only with individuals that this triple relationship can take place. If one is attached to this “study of the concrete which is complete”, one must necessarily perceive that “what is true is not the prayer or the law, but the Melanesian of such and such an island, Rome, Athens.”

LI, wow, what a post! Three questions jump out at me - and demand answers while I plead that I have to run to a movie!
a) the articulation - the relations - of the total social fact.
b) the question of revolutionary time tearing up or away from material interest.
c) and whether the latter has not a little to with the savage (or the archaic).

But before I head out, here's a shout out to Marx. It is his birthday after all. Bon Anniversaire, Mr.Marx! Je vous salue!

Oh, Amie, I'm glad you liked it. This is a small breakthrough post for me, on my way to justifying a methodological instinct - which is that I do have a reason for following individual lives and circles in my search for the beginning of a shift towards - the happiness culture.

In a sense, these circles constitute society's precogs - their cognitive/affective responses are out of synch with the social norm. When Theophile de Viau compares himself to a witch, he is making a pretty serious joke.

That the revolutionary moment that cannot be justified within the system of production in which it emerges on any economic ground - that it can't serve as a material interest, insofar as that interest is defined by a system that doesn't exist as of yet - makes for the disymettry of the emancipatory moment. On the one hand, it renders the relationship between the dominant class and the dominated impossible, since it tears away all the disguises from the past; and, to succeed, it has to put in place of that relationship something which can't be material at all, inasmuch as it refers to an ideal in the future. This is a rich moment, rich with a variety of shames - one of which is embodied in the obsession with matter as, somehow, superior to any ideal, any "brainbuilt" structure. I can feel the tug of that attraction to matter, but it seems to me to be ultimately a distortion of the realities at play in the emancipatory moment. A distortion that quickly falls into hedonism that justifies the whole bourgeois system, except this time it is going to be a "realer" happiness.

At least, these are the concepts I'm crawling towards.